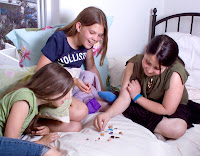 We get a lot of unsolicited stories from people who use Think-ets. Some of them crack us up; some of them make us smile; and some of them are things we never would have guessed.

One of my favorites is from a Mom who talked about how her "I-only-like-to-play-video games" son got wilder and wilder with the stories he was creating with Think-ets.

"Think-ets was great fun. My daughter begged me constantly to play again. Then my 7 year old son joined in. Fun. BUT then, my 12 year old son wanted to play. Nice kid, sweet and all, but does love to play video games with his dad. Soon, our usual story line which included magical shells and mystical tea parties ended up with limbs being dismembered and villains rising from the dead and zombie invasions. The funny thing was that everyone was cackling at the twists of the game each time it was someone else's turn. To be very honest I actually have to tell them to give me a rest from it sometime, that's how much they want to play. Thanks so much for such a simple but ingenious invention!"

Another one comes from a waitress in a restaurant who said that she uses Think-ets to give to parents whose kids are having a meltdown at a nice restaurant.

“I thought you might like to know that I work in a not very kid-friendly restaurant (think boring for kids) and the Think-ets that I keep in my work bag have saved a couple of families from the dreaded meltdown. That's what we use ours for too. Great product.”

Hey, if we can help parents eat a nice meal out AND have kids entertaining themselves with brain games, that's pretty cool.

Of course, Think-ets makes for a great travel game. If you are lucky enough to travel to Italy, you can bring it along with you to all the great Italian hot spots.

"We brought think-ets on our three week trip through Italy.  It was the perfect travel game - light, FUN and always fits in mom's purse!

Or if you're traveling in the good-ole-USA, you can bring it along as your go-to travel game.

“A sister-in-law from Brooklyn, NY had Think-ets on a recent extended family trip to Florida and it was played often with cousins at restaurants, poolside, and waiting places."

As far as I'm concerned if water and Think-ets are involved, I'm happy.

Then we had the media specialist (aka librarian) who used Think-ets to create a school-wide thinking competition at her elementary school. Barbara Medford was tired how all the competitions always at Bedford Hills Elementary School were sports related and she wanted to promote thinking skills in her students. That year, her school was trying to get kids away from the TV and video games and using their brains. So, Barbara created a day long competition—and it was a huge hit. She says:

“You could feel the excitement at the school build. Kids really were so excited to participate and those who moved up to the finals were thrilled. Many kids are good at sports and some kids don’t have that talent, so this game is good for them. I cannot express the excitement and enthusiasm that this game has created among our students. Thanks again for creating this marvelous brain exercising game!”

We all know how important family bonding time is. What we also know is that games make great family bonding activities. So we loved it when well-known author Daniel Pink (author of A Whole New Mind: Why Right Brainers Will Rule the Future) wrote to us and said:

"My family and I have had some rollicking good times playing Think-ets.  It's a terrific game for both sides of the brain!"

I think bonding happens whenever the word 'rollicking' is used.

Finally, we discovered that the game has even been used by the tooth fairy. Says one Dad:

"Whenever our daughter lost a tooth, she was instructed to put it in an empty Think-ets bag under her pillow.  By the following morning, the tooth fairy had removed the tooth and filled the bag with Think-ets. In a few months our younger daughter will start losing her teeth. Time to stock up on Think-ets again!"

We also hear from speech and play therapists, social workers, and lots of people who travel and are on-the-go. The game seems to be so creative and so portable. And, there is just something about the look and feel of miniature items that kids—and face it, adults—love.

It's just been fun to hear from people over the years how they have played with Think-ets. We even ask people to send in their stories (and photos) of the craziest places they have ever played the game—and we've gotten some good ones. Mine is when my daughter Meryl and I played with our Think-ets game in the revolving restaurant at the top of the Stratosphere Hotel in Las Vegas. (And, yes, we were there to see Cirque du Soleil.)
Posted by Think-a-Lot Toys at 9:31 AM No comments: