The Importance of Encouraging Free Play 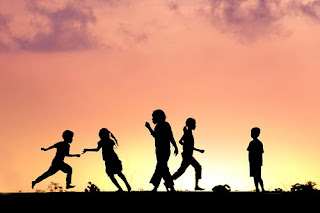 A leading colleague in the field of toys and games wrote this letter to Mrs. Obama that I thought was so good it was worth sharing in its entirety. It's a wonderful ode to the importance of open-ended play--something all of us here at Think-a-lot Toys believe in wholeheartedly...

I was very pleased to read about your efforts in getting America's children active through your “Let's Move America” program.

For those who may still be unaware of your initiative, it has set as its goal “…solving the challenge of childhood obesity within a generation.” One way that the initiative seeks to get some of that weight off is through getting kids to get out from in front of their computer screens and go outside and play.

When we were children, we had lots of free time, particularly in the summer when school was out. If we decided, for example, to play Wiffleball, we and not our parents decided which bush or tree was a base and whether hitting the ball out of the yard into the street was a home run. In addition, we chose our own captains, the captains chose their own teams and everyone had to decide (with no parent or umpire present) if someone was out. In short, we made the law, we obeyed the law and we enforced the law.

Don't get me wrong, indoor games are vitally important to a society as well; they teach us how to regulate our lives within a legal structure, and if there is a disagreement on the interpretation of the rules, we learn how to parse them and make a “legal” decision. Outdoor games, however, give us something more. They don't just teach us how to obey and interpret the law, they teach us how to make and enforce it as well.

So why don't kids go out and play today?

They simply don't have the time. There are too many soccer league practices, too many music lessons, too many adult-organized play groups and too many hours spent riding in the back seat of a car. When they get home, they need to do their homework. It's no wonder we hear so much about the amount of hours kids spend in front of TV and computer screens.

Children haven't just lost the time devoted to free play; they have lost the spontaneity that comes from having no adults in their way. Remember how much fun it was to play with no adults around? In fact, 'grown-up' was almost a bad word in those days. Who needed them? As long as we stayed on the block and no one got hurt, cried, fought or yelled too loudly, we got to do pretty much whatever we wanted. Mostly, at least to our parents, we were seen and unseen. Like little wills of the wisp, we scurried down alleys, climbed over fences and crawled under porches. We were out there, our parents keeping half an ear and an eye out in the hope that they might spot us. Children today, however, are overly guarded and guided. Adults hover over them, choosing teams, establishing rules and setting boundaries. Children simply do not have any freedom. They are in a perpetual lock down.

So, here is an idea, Mrs. Obama, ask America's parents to give their kids back their free time and their freedom. Let them employ their imaginations, their backyards and their friends to choose what they want to do as well as when, how and with whom they want to do it. We will all be better off for it.

(Richard Gottlieb is president of Richard Gottlieb & Associates LLC, a provider of business development services. He has 35 years experience in the toy industry in sales and sales management. He can be reached at richard@usatoyexpert.com)

Posted by Think-a-Lot Toys at 8:08 AM No comments:

The Importance of Play in Education

Do you remember what you learned in elementary school? For most of us, that was a long time ago and we probably don’t remember much. But we often remember those fun events where we learned and played at the same time. Barbara Mehler is the media specialist at Bedford Hills Elementary School in Lynchburg VA and she came up with a very creative way to engage the kids at her school. She created a Think-ets Competition, based on the Think-ets game by Think-a-lot Toys.

She realized that there were lots of events where kids who excelled in sports got support and recognition for their talents but there weren’t events for kids who were great thinkers. So, she created a Think-ets Competition at which students played the classic game, “What’s Missing?” in pairs. The winner of each pair would advance to the next round--and if they were smart enough, they would reach the finals. The winner of the finals would win a free Think-ets game.

As she said, “We based the competition around the memory game, “What’s Missing?” because what we have been doing in the library for the last month is exercising your brain without watching television or being in front of a computer. I have gotten a lot of different kinds of games for our school but none of them have taken off like Think-ets. They think it’s just the most marvelous thing. I cannot express the excitement and enthusiasm that this game has created among our students.” Now isn’t that cool?

When kids get engaged in something they love, they often “take it to heart.” The simple game of Think-ets has been such a game for this elementary school. Any other elementary school want to take up the challenge? Send us your story and we'll send you a free game.
Posted by Think-a-Lot Toys at 10:15 AM No comments: